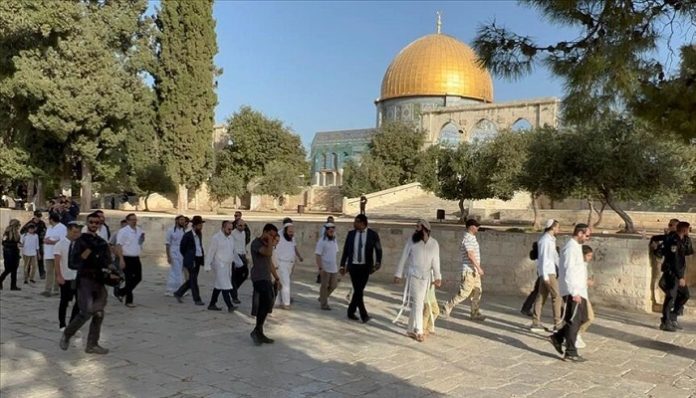 Pak Sahafat – A number of Zionist settlers attacked Al-Aqsa Mosque again on Sunday under the protection and strict security measures of this regime’s police.

According to Pak Sahafat News Agency, citing “Palestine Ilyum”, the Zionists performed a Talmudic ceremony inside the al-Aqsa Mosque area with provocative actions.

Zionist settlers attack Al-Aqsa Mosque daily. This is while the Zionist police are preventing Palestinians from entering Al-Aqsa Mosque and are taking strict measures against them.

The spokesperson of Hamas recently stated that the occupying regime has intensified its attacks on Islamic holy places in Quds and announced: What is happening in Quds and Al-Aqsa Mosque is playing with fire.

Hazem Qassem called on the Arab countries and the international community to take action against the occupation regime’s aggression against Al-Quds and Al-Aqsa Mosque.

According to the spokesperson of Hamas, the continuation of the war against al-Aqsa Mosque means that the occupiers act with the logic of bullying and do not pay attention to international laws and resolutions.

Earlier, the Palestinian resistance groups also called for increasing conflicts, fighting and confronting the Zionists, stating that only uprising and struggle will stop the Zionist regime.